I have an affinity with water which is present in earliest memories. Raised in Melbourne, Australia, the water, mostly was clear. We learnt to swim in Port Phillip Bay and discovered diving in to the water, exploring the underwater world, fascinating.

Sometimes, the silence, the peace of skimming below the water’s surface was so compelling,
it was almost a challenge to rise again.

I experimented with water environments through photography. Waves on California’s west coast, streams, lakes effected by current and wind, and then the water surface texture from underneath.

I saw much promise.

Experimentation, for me, progressed. Looking west, watching waves break on a small Port Phillip beach around sunset, a flash of light caught my eye. With a high-end digital camera, tripod and telephoto lens, exploration began.

Setting the camera to manual, selecting a relatively slow shutter speed, pushed the lens for the most depth of field, experimented with manual focus and then fired away.

One of the first images out of the camera begins this series.

I was amazed with the dance of colour, movement, shape and light. This was not visible sitting on the cold sand. I found a whole new realm of expression. Timing was critical. So was the angle of the sun, direction of wind and level of tide.

This photo is framed and with me at home. The picture itself is 1.2m X 80cm and even at that size, crisp and full of detail. I am always finding new aspects amongst the cathedrals of colour and light. It is the aha image, for me. Maybe, I thought, other people might also enjoy this style. At a recent exhibition, the gallery staff developed a special presentation just for this image because there was so much interest.

I have this image face mounted. It rests on an aluminium composite backing and is covered with 6mm of an acrylic that almost eliminates light damage. It has a presence. This was the star of my first solo exhibition at the Colour Factory in Melbourne and sold on the first night. It was donated back to me by a generous patron and also contributed to that aha moment that began, for me, a wonderful photographic journey. 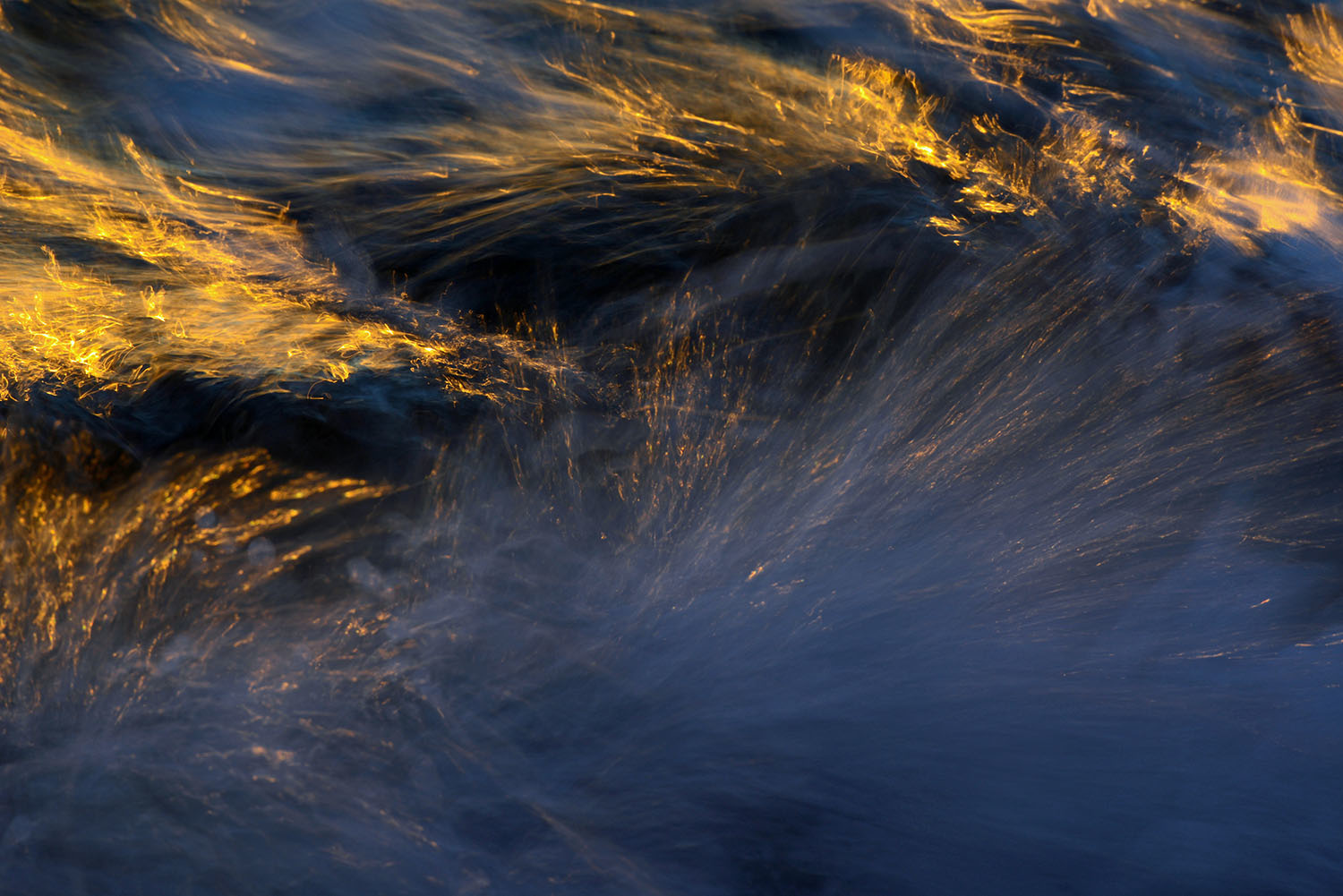 And while much of the interest for me was light coming through waves, there is too, the symphony on the surface. This image was both reflecting and allowing water to pass through a ruffled surface. And all at the moment the wave broke, the light catching, transforming spray into slivers of colour. 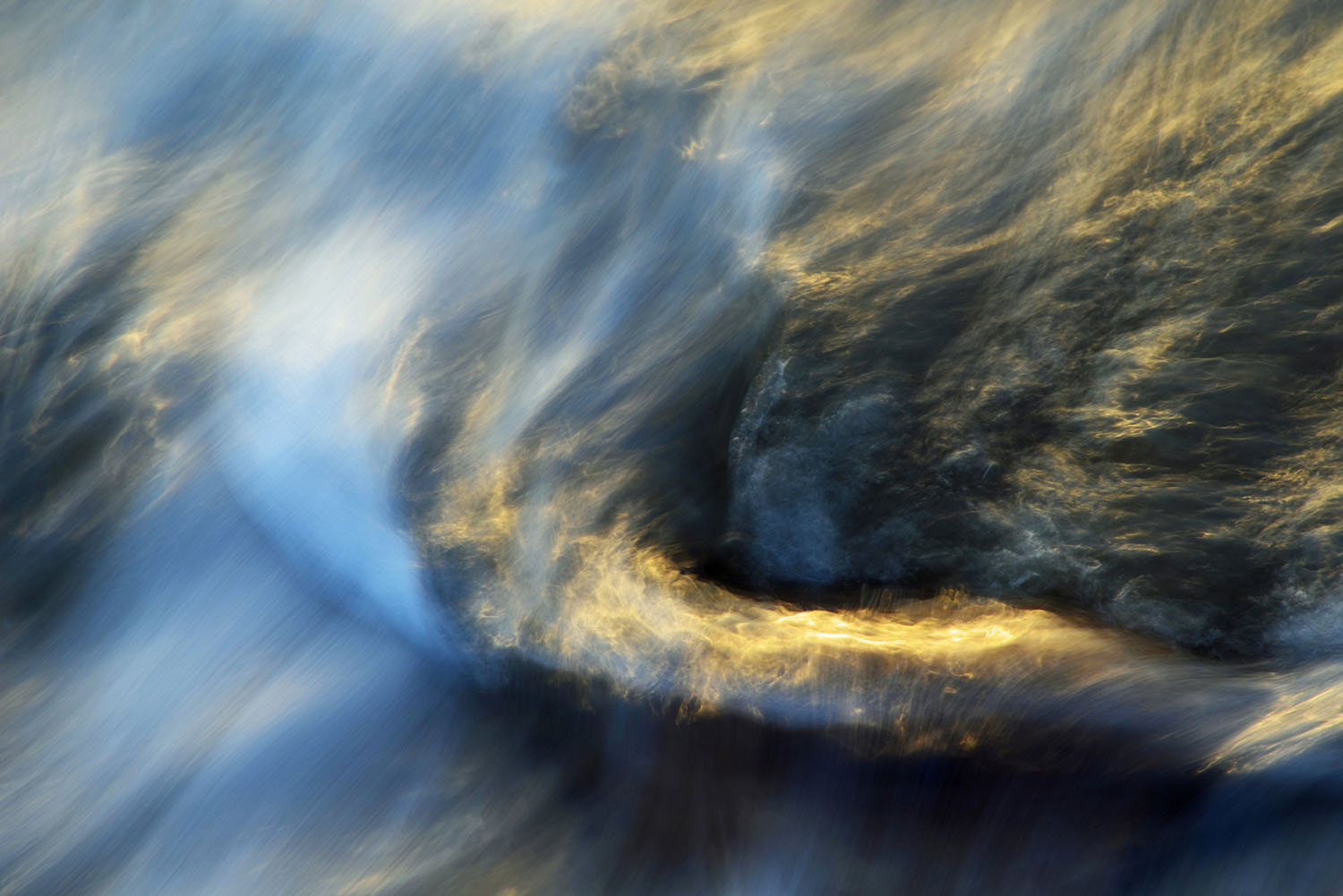 On this tiny beach a rock was exposed, the tide and the sun were low, the waves unusually high. Standing above the surface, camera hand held and a slightly longer shutter speed, I waited until the wave retreated. The disappearing golden sun worked its magic. 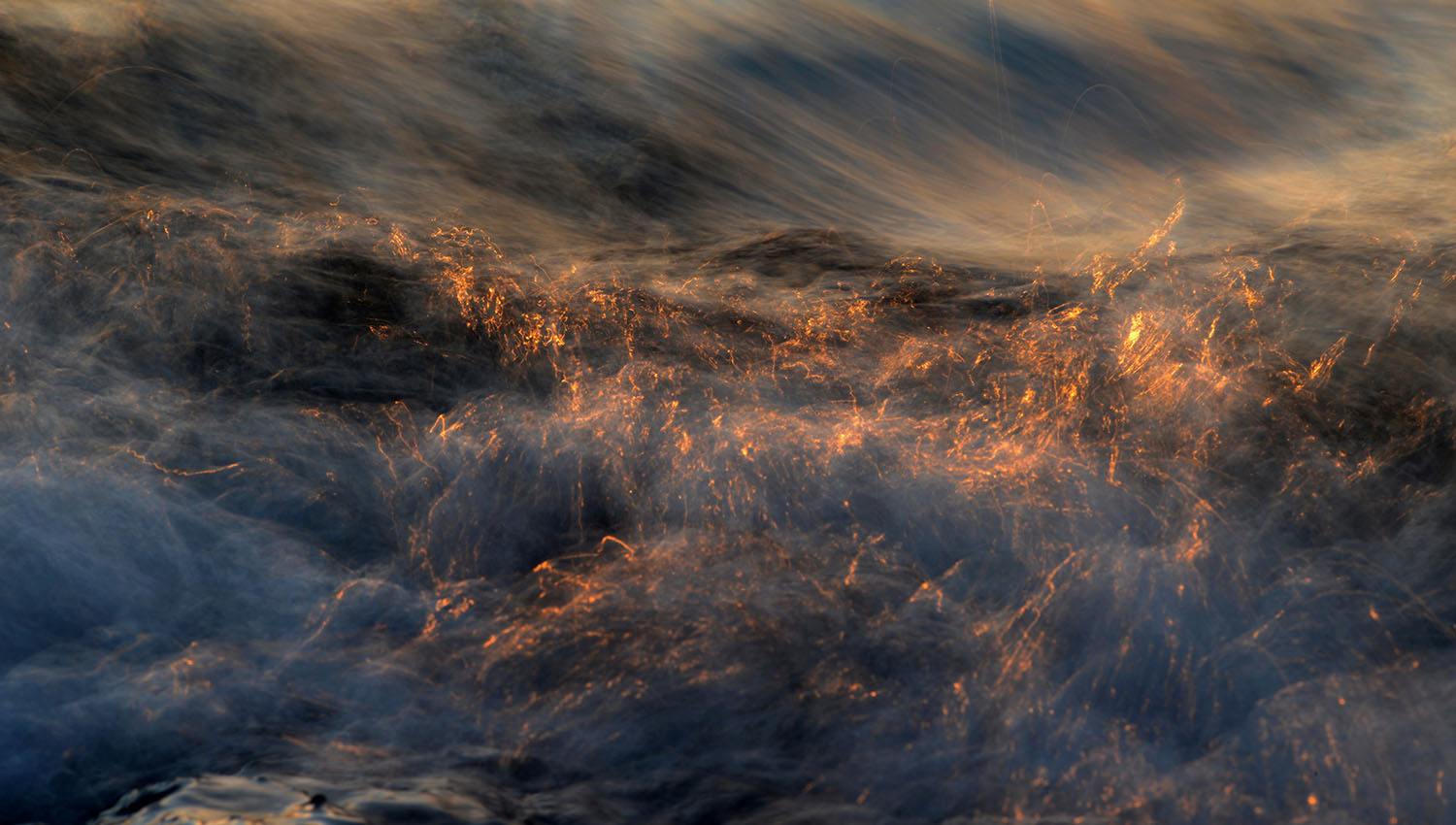 In the background of this image is the smooth canyon of an approaching wave. Its companion has already arrived with a candy floss of shape blessed with the vision of a setting sun. Somehow, the confusion of shapes is given meaning with the spontaneity of colour and movement and an impression of welcoming softness. 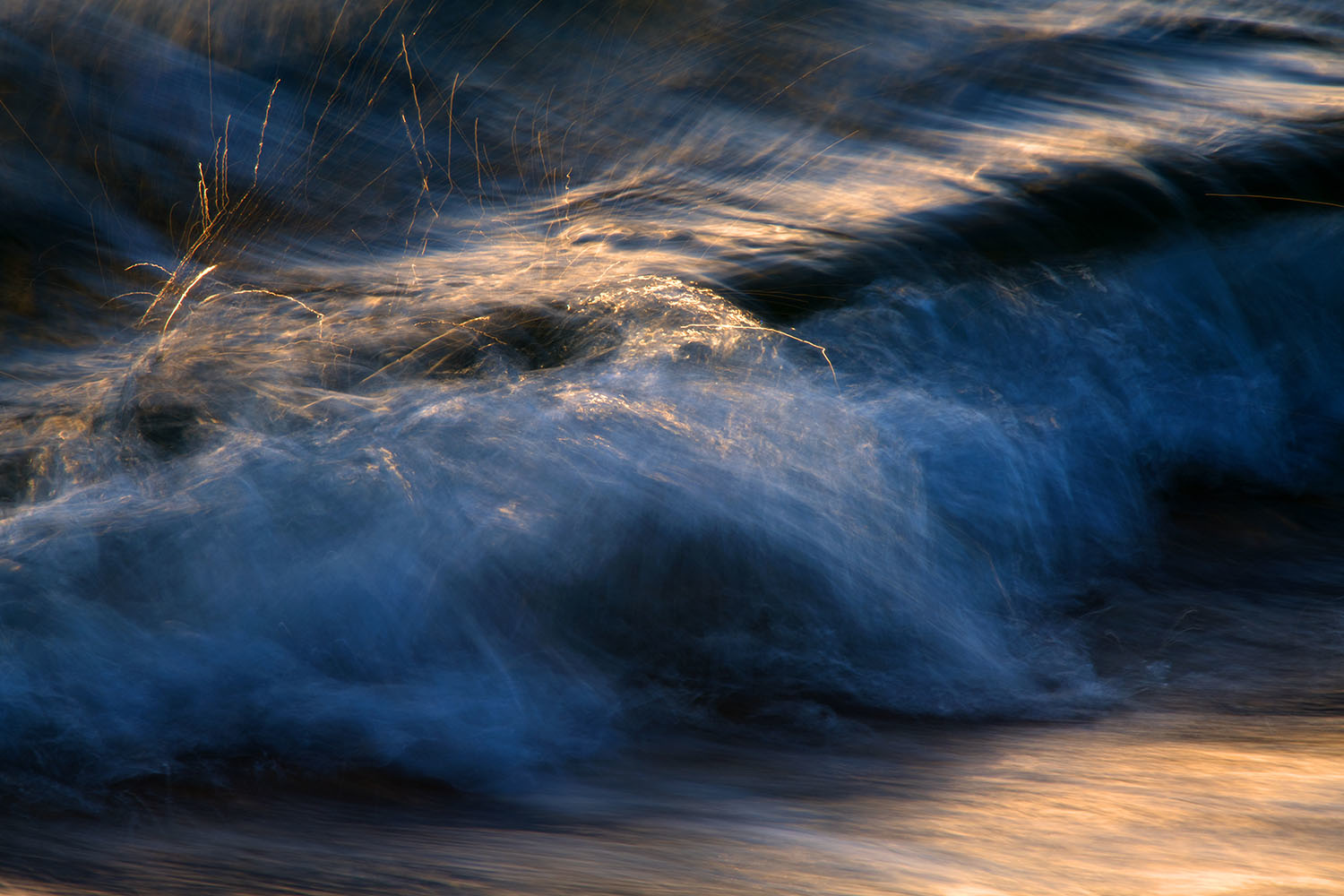 There are times when the delicate movement of water as the wave breaks is completely unexpected. And that dance becomes the focus and lifts the image. There is too, the foreground patch of gold and a delicate blue, reflecting a cloudless sky. 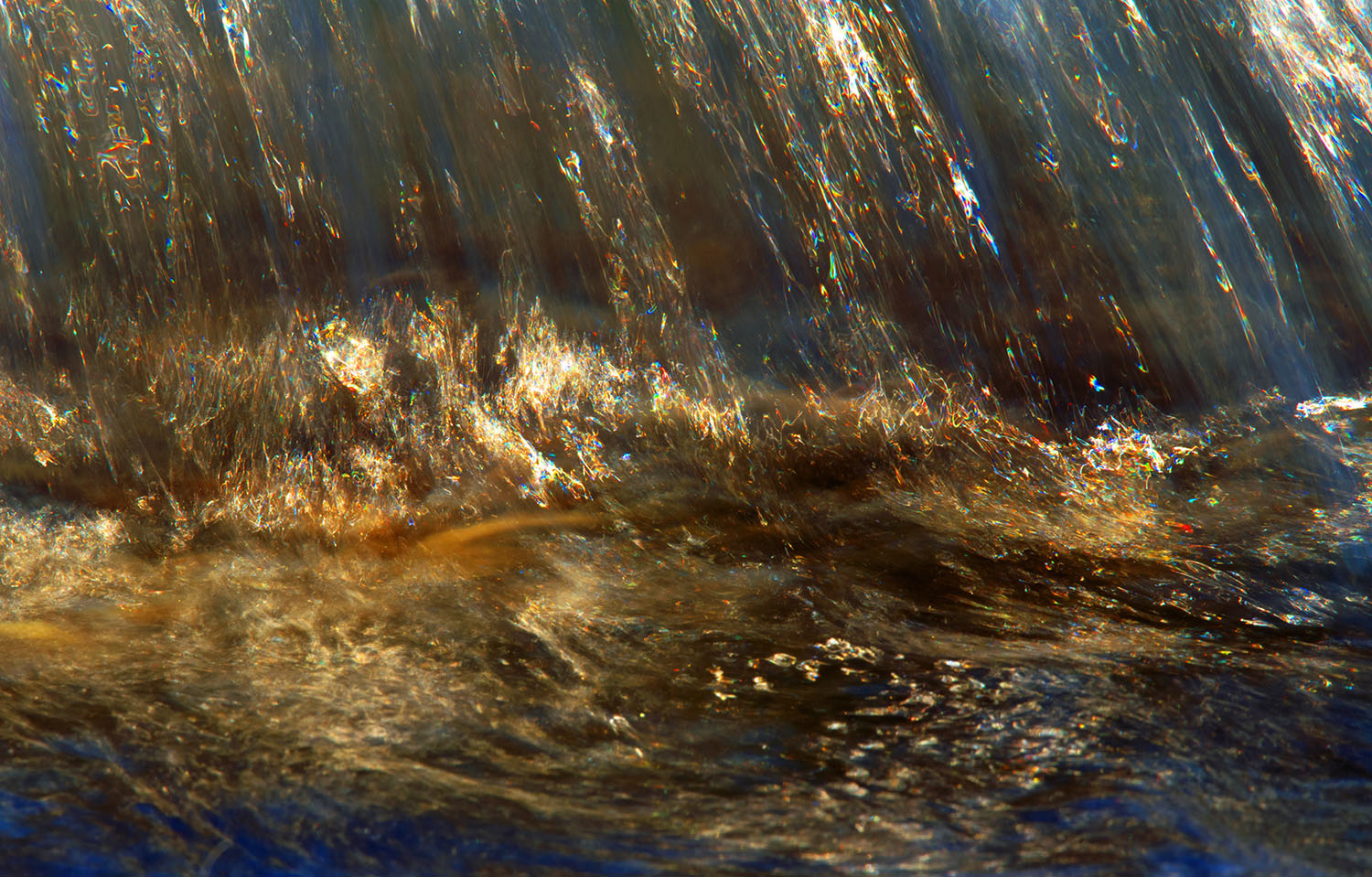 As this wave breaks, a curtain of light is drawn across the image which also celebrated behind the falling water, on to a grateful dancing base of the wave. The camera and I are seated, the lens on a tripod and we are only a few metres from this festival of light and movement. 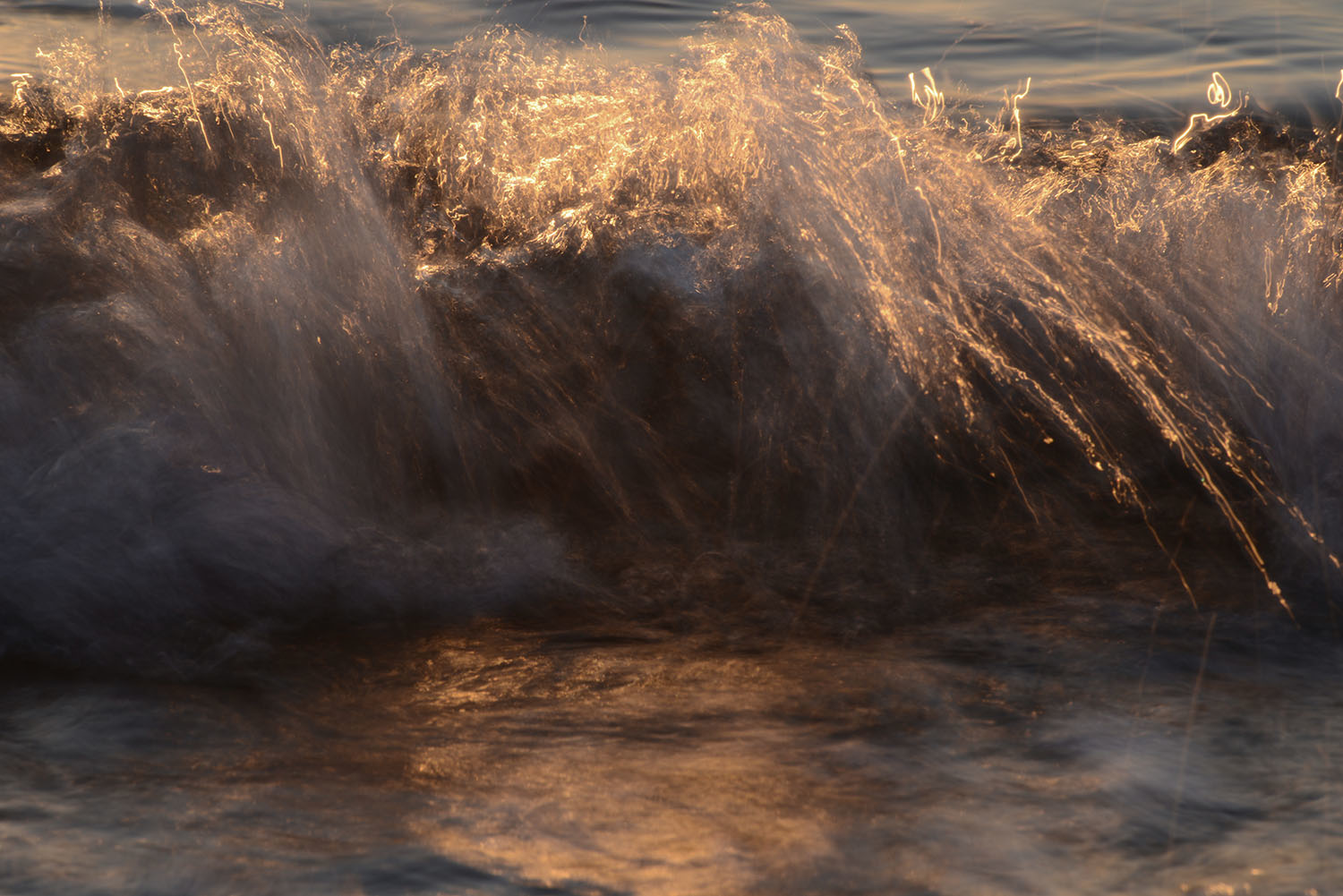 When first viewed, I passed by this image. But, revisiting, found the unusual combination of sunset painted background and slightly outrageous explosion of the breaking wave, compelling. Also surprising was the patch of foreground gold courtesy of a quietly persistent sun illuminating the surface through the wave. 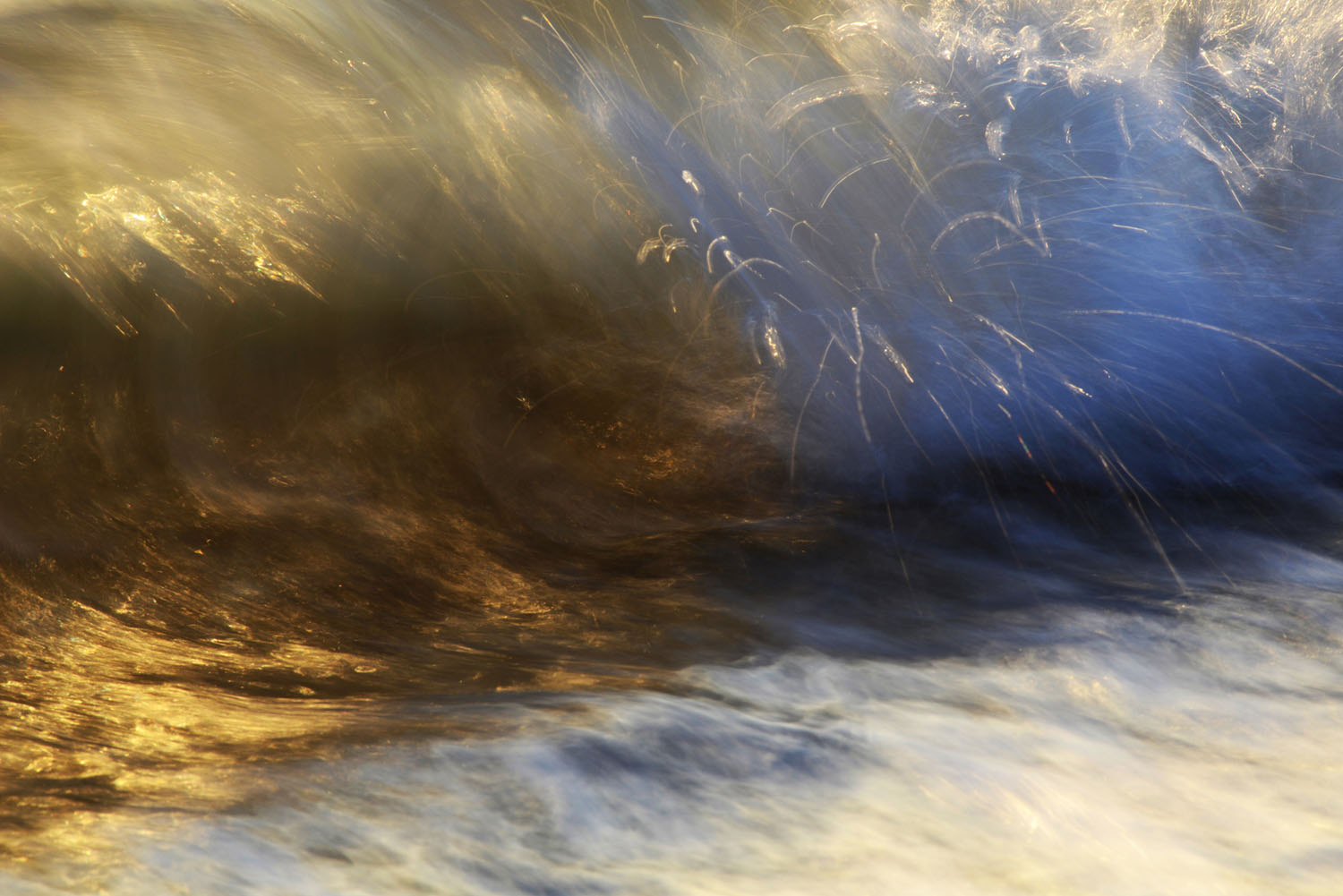 This image is almost the complete package. From the soft muted foreground, outburst of spray and deep gold light I am left excited, subdued and enriched. So much had to come together, for me to make this image successful. And really, this can be the beauty of this genre. You are watching a great genius of composition of creation at work. I am merely a grateful observer. 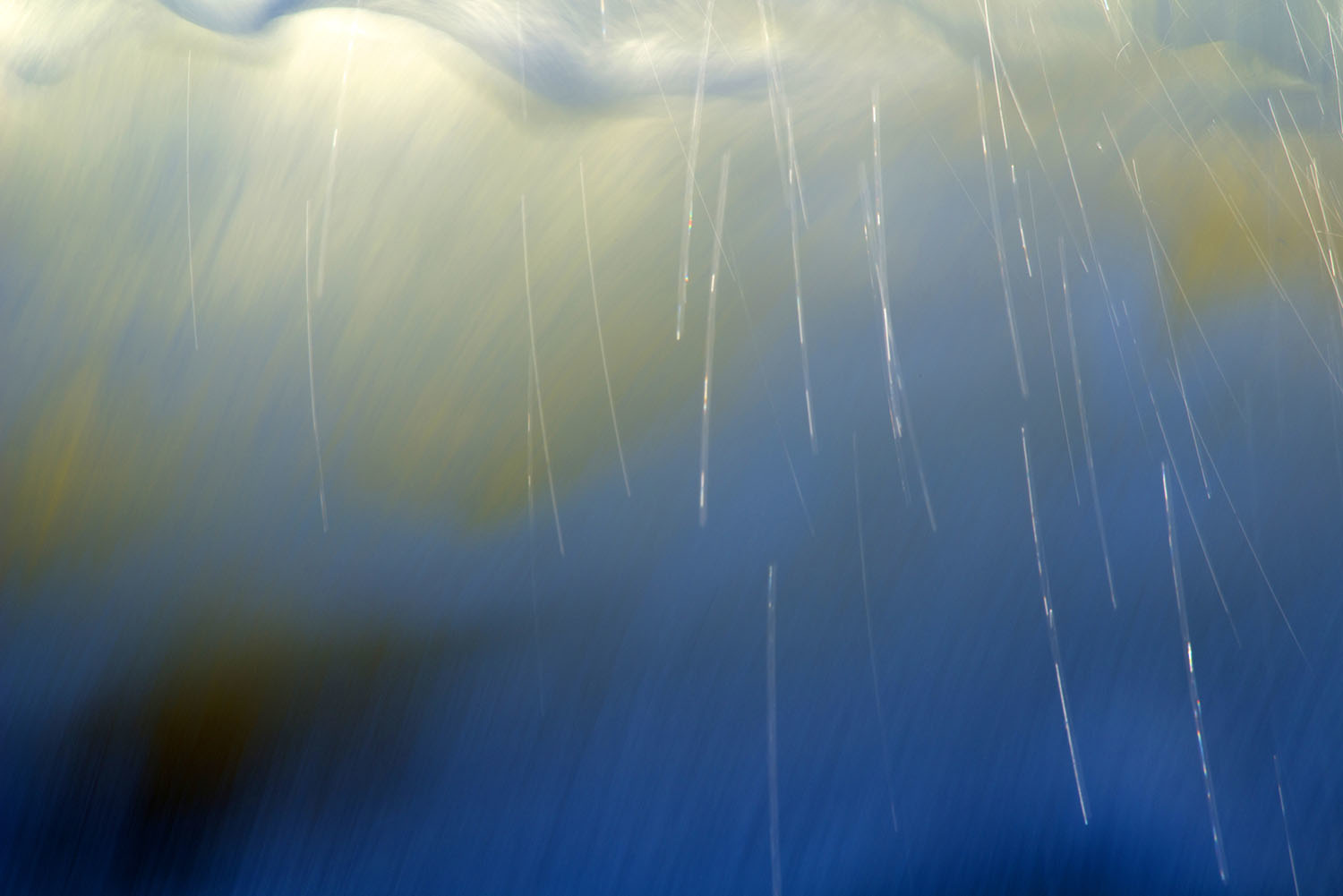 Simplicity moves me. Again, I initially didn’t select this picture. But the long fine lines of light kissed drops, the soft shapes of an imminently breaking wave and changing blues, won me over. In the top left the light is beckoning and below, mysterious depths which might surprise the viewer to know this wave is less than half a metre high. 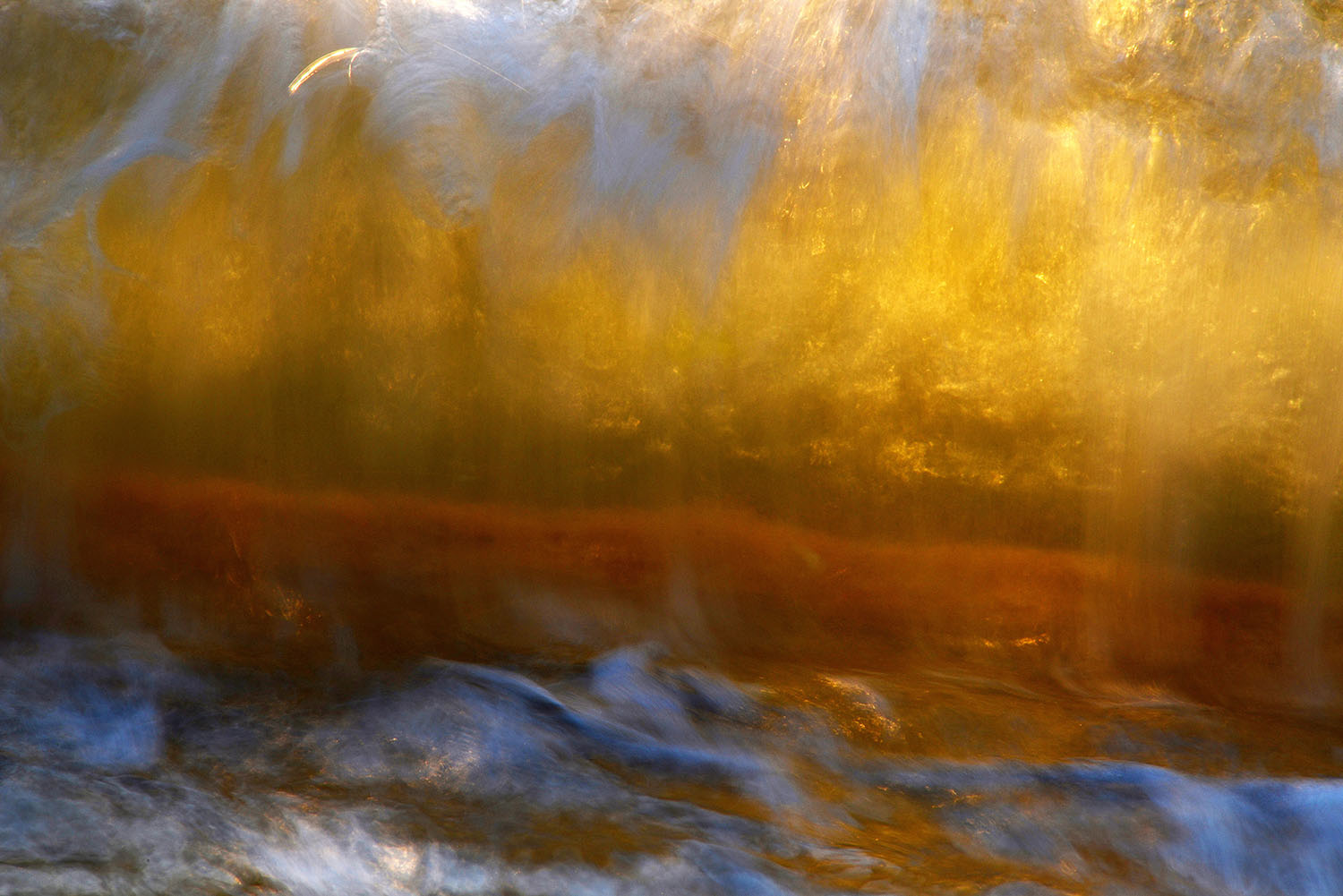 I exhibited this image in Black Eye gallery, Sydney and also locally at Without Pier. I was overwhelmed with the number of people who likened the picture to the brilliant and famous romantic 19thcentury English painter William Turner. This comparison was also given to several other of my images. All I can say to those generous commentators is, thank you. As always, I am not the artist, as was Turner, but merely the observer who just happened to press the camera shutter at a point in time. 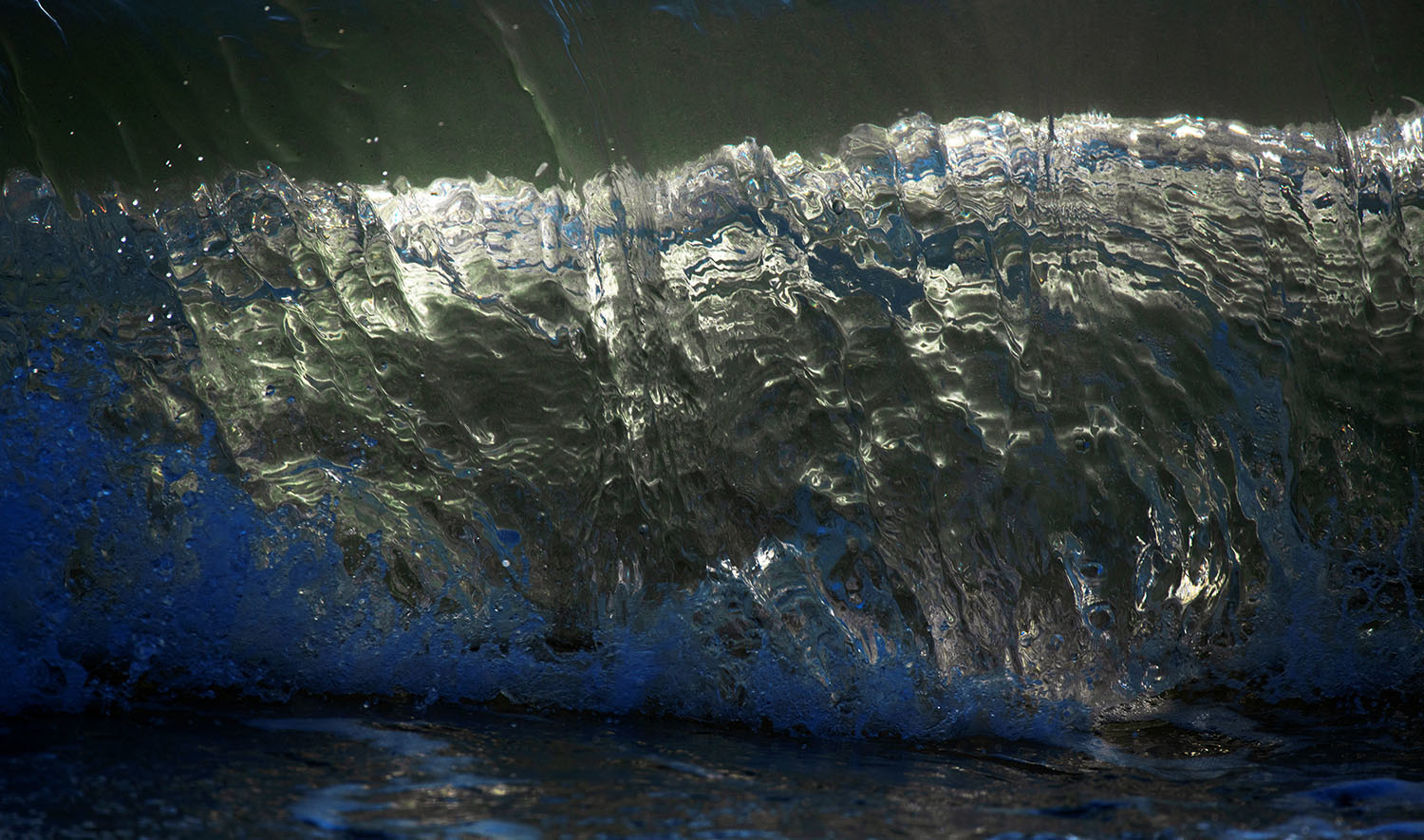 With changing sand levels on the first beach a new environment was explored.

Also, my equipment moved up a notch with the next generation digital camera and fast focusing longer focal length lens. Now I could dive deeper into the waves, you might say. With the shift in location, images changed in colour and style.

With this image, I tried a much faster shutter speed making the image more literal. Although, the back lighting of light through the wave still retained. The colours are now almost metallic without the soft, romantic sunset colours. These also a frozen glass impression and a delicate fragility which is absolutely true. Millie seconds after the shutter closed, the ingredients of the image shattered, never to return. 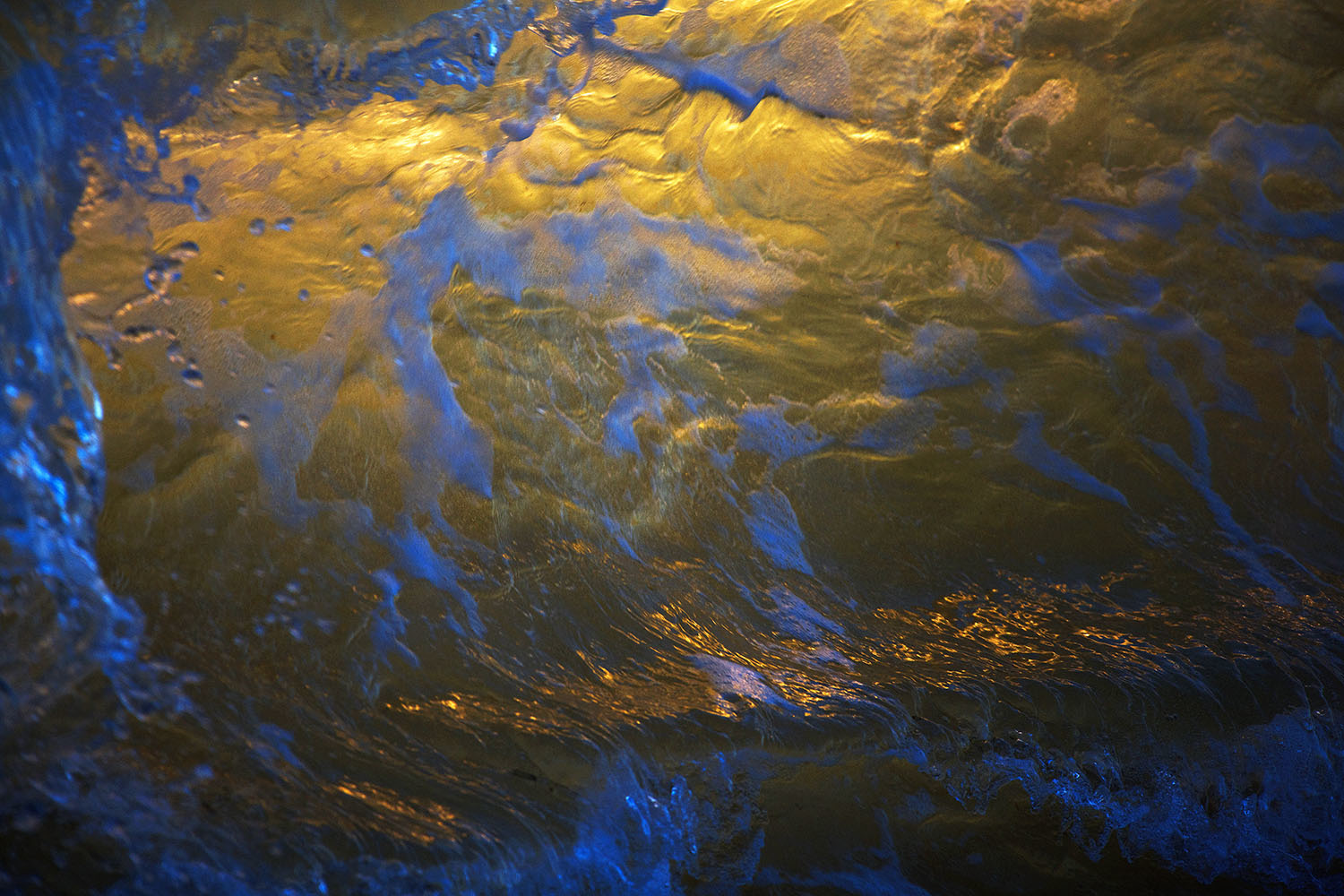 And this image is like a golden wall of glass with whispy blue clouds floating across. A high shutter speed and probing long focal length lens froze the vertical wall of water. In the top right corner, you can feel the wave readying itself for the final fall and every moment transforming until it becomes a fading memory. 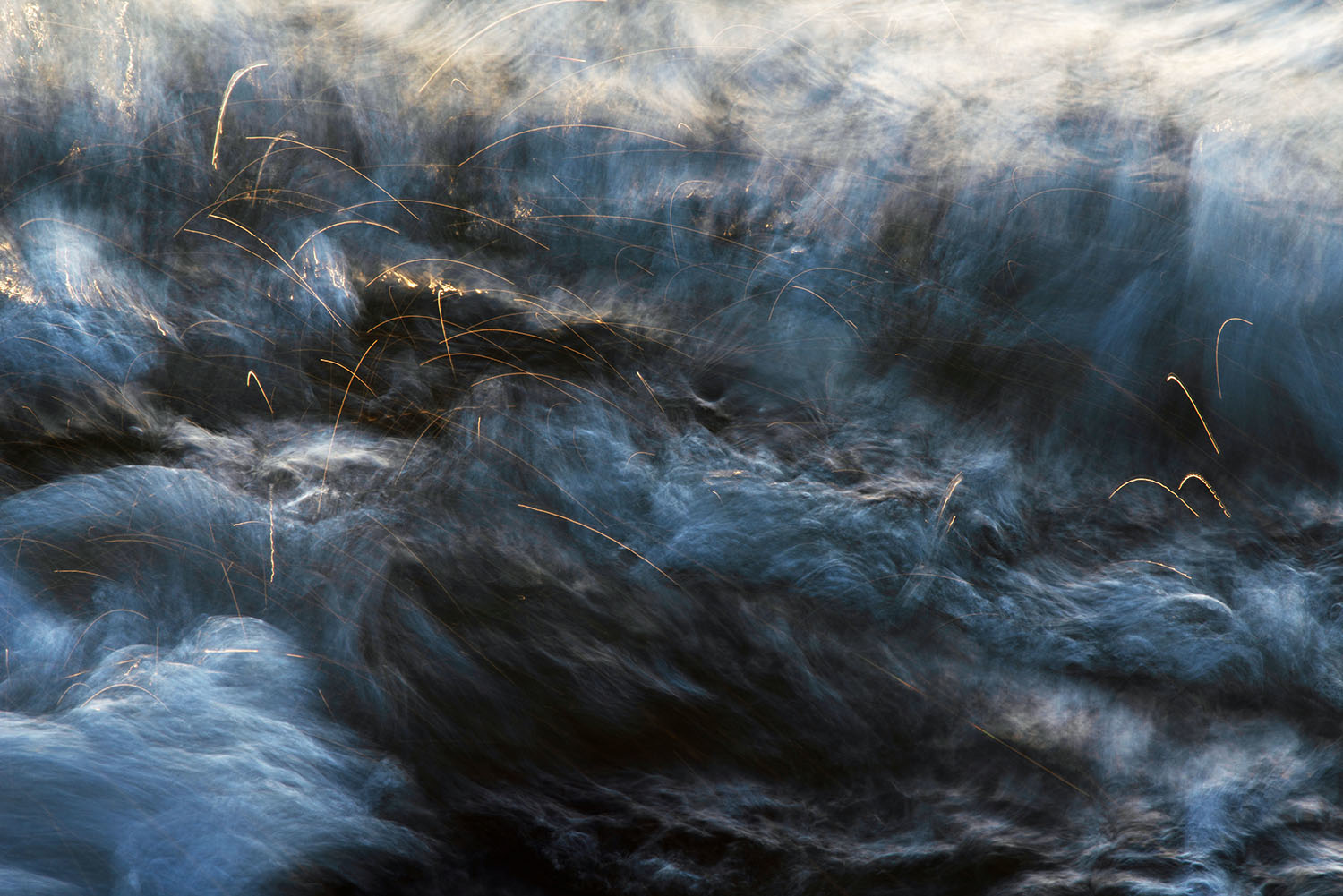 There were times again when the surface dance beckoned. The reflected blue of the sky, soft almost smoky texture of the breaking wave and playful, sunset kissed leaping drops, took my breathe away. 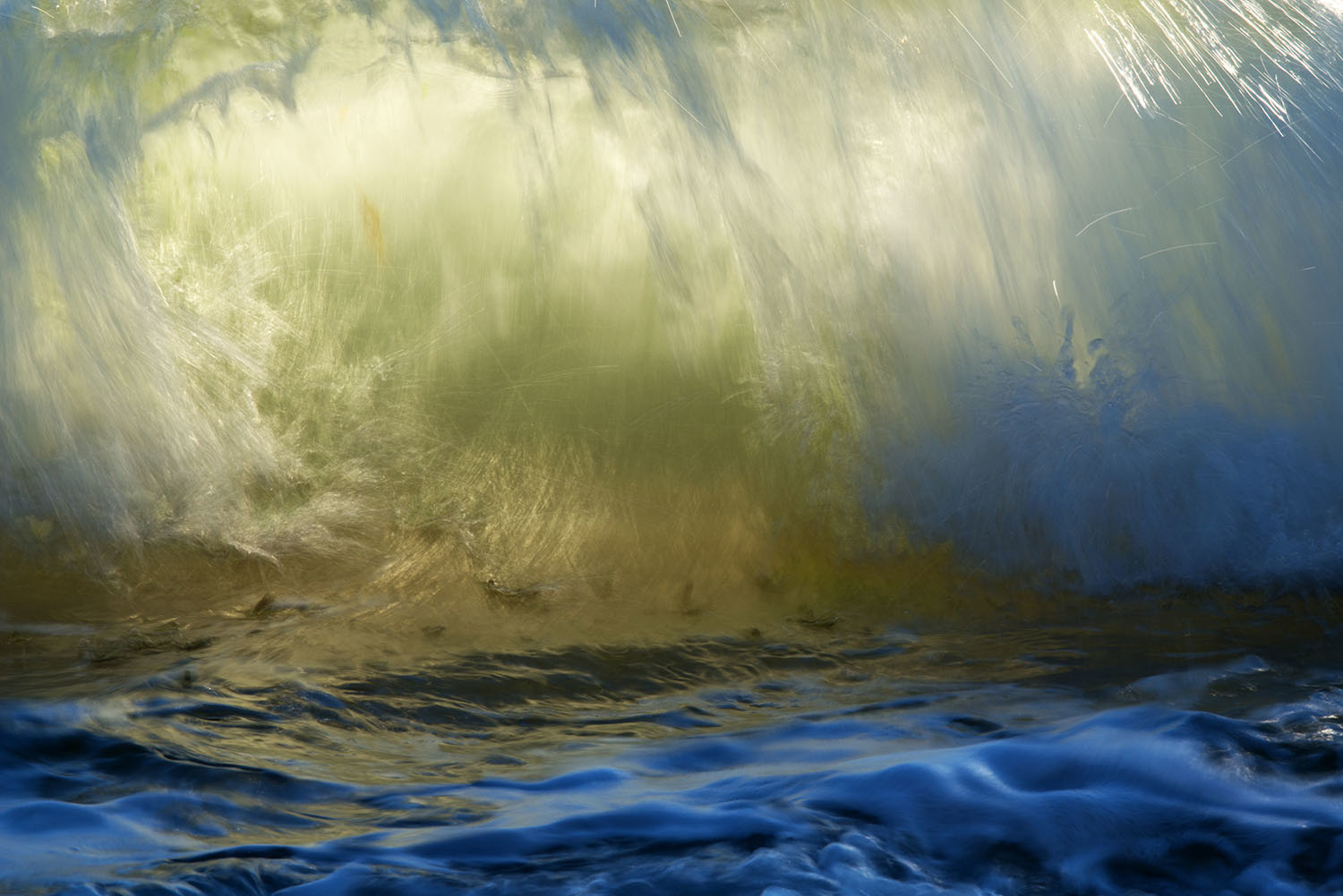 The longer focal length lens meant I could enter more into the heart of the wave. It was back to longer shutter speeds and pushing depth of field being drawn into an unknown destination. I was exploring the corridors and canyons that lead off into the distance, treading first a blue covered pavement that transformed into gold.